Okay, time to reveal the source of the ‘challenges and opportunities’ (known to others as ‘frustration’) that I encountered Tuesday night and Wednesday morning…

It looks so innocent doesn’t it?  Some might even call it ‘beautiful’.  Before it arrived in the post, I was even referring to it as the ‘Sexy Salsa’.  Now I just call it the ‘smartypants’ phone :-/

I thought it was about time that I embraced the new technologies of the 21st century and get myself an ‘android smartphone’ (I don’t have a clue what that means!)  This upgrade (£13.50 p/m) is actually cheaper than my old phone deal, so I should add it to yesterday’s ‘Big Budget Challenge’ post.

Well, it turns out that the ‘smartphone’ is way too smart for me.  I didn’t have a CLUE how to use the thing.  I was chuffed when I finally worked out how to turn it on after 5 minutes of fiddling… but it all went downhill from that point onwards.

The phone had automatically ‘synced’ with Facebook and my phone contacts list was then filled with the phone numbers of Facebook ‘friends’, rather than my regular friends.  I pressed the first name that appeared at the top of the screen to see if I could edit it.  To my horror, the phone started calling the person… Esther in Canada!!!  It took me ages to work out how to end the call (because I’m so thick when it comes to new technology).  THEN, I accidentally rested my finger on the phone… and it started ringing Esther in Canada again!!! aarrghhhh!

I gave up and decided to have another try in the morning.

M asked me if I’d read the manual.  I checked the manual and no, it doesn’t mention how to make a phone call or send a text as it ASSUMES that everyone already knows how to do this.  The manual just talks about ‘Facebook Chat’, ‘Snap, tag and share’ and other things that I have NO clue about.

I finally worked out how to send a text, but my fat fingers seem to press about 5 letters at once.  A 2 sentence text took me about 5 minutes because I had to delete every other letter.  I can’t wait to let my mum have a go (mind you, she can’t do worse than me lol!)

My second ‘challenge’ on Tuesday night/Wednesday morning was an attempt to move my blog to a new host.  My new hosting provider has a ‘1 click install’ which is described as being so simple that even a 4 year old could do it.  I’m sure a 4 year old probably could do it… but I failed miserably. It’s still not sorted, but I’m hoping that my wonderful tecchie friend ‘E’ will be my saviour on this one.

So after a rubbish Wednesday morning (which I’m happy to say wasn’t a complete waste of time as it’s been a great source of amusement for my friends), it was a relief to leave the house, the phone, the computer, and go to teach my kids’ meditation classes.

The kids were little stars as usual. Just watching them meditate filled me with such a sense of peace. Apparently, Lil’ L and some of his friends had been meditating during playtime, before I’d even arrived at school.  It was a very chilled, rewarding afternoon.  This carried on after school too.  I sneakily took a picture of Lil’ L meditating in the garden…

And here’s a pic of another 2 of his classmates meditating Wednesday evening (emailed to me by their mum).

Don’t they look so peaceful?

And finally, here’s a beautiful picture that another one of Lil’ L’s friends drew on Wednesday afternoon. 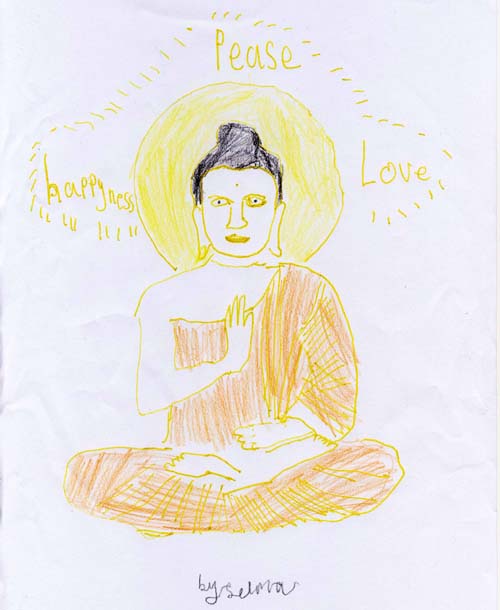 What a beautiful way to end a crazy day!

I’d love to upload these images onto my new smartypants phone but that’s one step too advanced for me.  Maybe I’ll ask a 4 year old 😉

Have a wonderful weekend everybody! xx

10 thoughts on “My Little Saviours”