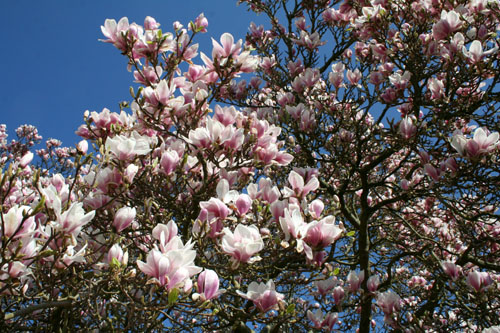 Hi everyone!  I hope you’re having a great week so far! 🙂

What glorious weather we’re having here in the UK!  What with the clocks going forward on Sunday, the lighter evenings and warm sunshine, it feels like we’ve entered Summer rather than Spring.

The magnolia tree by our front door is now in full bloom.

I love the blossom on these trees. Yet another beautiful sight of Spring! 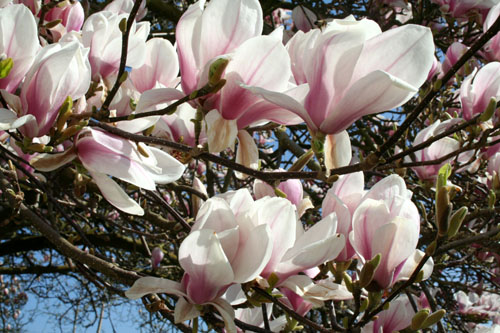 We spent the whole weekend outside, enjoying the good weather.  On Saturday, we went to the market town of Devizes in Wiltshire and had a lovely lunch sitting outside the Little House of Coffee, in the Market Place.  The town was buzzing with activity and had such a great vibe.  The people here are so friendly! 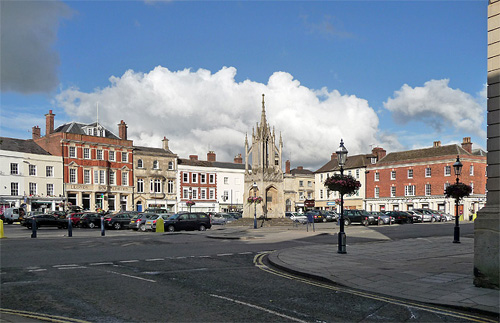 We then popped to see friends in the village of Seend Cleeve and had a great time catching up with them whilst sunning ourselves in their garden.  Is this seriously March?  If feels more like July!

On Sunday morning, M, Lil’ L and I took part in the Sport Relief Mile in Victoria Park Bath.  It’s the first charity running event that we’ve completed as a family and it was so much fun! 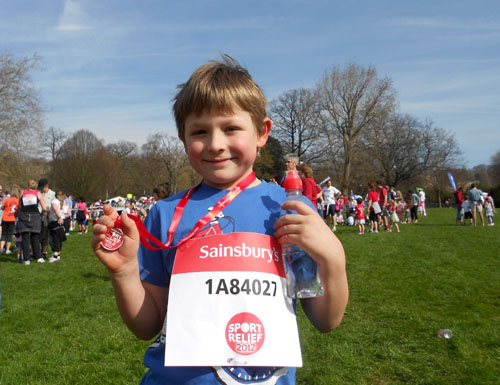 We’ve raised about £100, which we’ll be sending off to join the other £54 million + that has been raised so far for this very worthwhile cause.

Huge respect for John Bishop who cycled, ran and rowed over 295 miles from Paris to London in five days to raise money for Sport Relief.  Talk about guts and determination.  So far he’s raised over £3.4 million.  What a guy!  And he’s vegetarian!  Ha ha, had to get that one in there 😉  You can read about John’s “Week of Hell” here.  After seeing what John went through, never again will I complain if I get a stitch when I’m out on one of my little 4 mile runs!

Sunday afternoon we did some work in the garden, and I started to have a think about what to plant this year.  We’ve always struggled to grow veggies because of the billions of slugs, snails and other little critters that live here.  Rather than making the same mistakes over again, I thought it would be a good idea to start with a review of how our veggie growing attempts have gone this past year.

To be honest, it didn’t go as well as I’d hoped…

I’ll start with the disasters…

1. Tomatoes
We grew about 12 plants (10 from seed). We grew them in pots, grobags and some directly in the ground.  It looked promising, and we actually had little green tomatoes growing on the plants. 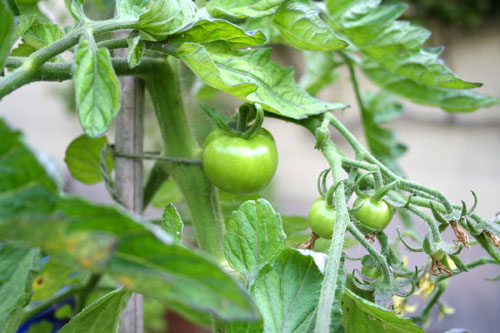 Then disaster struck.  We had so much rain last August that all the plants got blight and went black & mouldy.
Yield: zero edible tomatoes 🙁

2. Courgette (zucchini)
I grew one courgette plant in a pot.  It started to get eaten by slugs, snails and wood lice, so I ended up bringing it into the back porch every night.  It then got covered in black fly.

But then a ladybird took up residence on the plant and the black fly were gone.  The plant produced the most beautiful flowers and 3 lovely little courgettes started to appear on the plant.

As soon as we got back from our holiday in August, I rushed into the garden to see how my ‘pet’ courgette was doing… only to discover that the plant was covered in earwigs happily munching away on my little veggies 🙁
Yield: half a courgette

3.  Butternut squashes
I grew the squashes from seed and planted them out in the raised beds that M had spent hours making for me.  I covered the plants with bell cloches to protect them while they were small.

As soon as the bell cloches were removed…. the slugs descended!  Night after night, come rain or shine, I went to the veggie patch and removed the slugs.  In one night, I picked up 40!  There were 2 toads resident on the veggie patch and even they couldn’t keep up with the sheer volume of slugs.

The gravel round the raised beds didn’t deter the slugs (instead it just attracted cat poo 🙁 ).  We put copper tape round the top of the wooden border, and that didn’t work either.  I tried putting strong smelling plants (like rosemary) round the edge, again no luck.

Yield: zero squashes.  Most of the flowers got eaten before the squashes had a chance to grow.  About 5 little squashes did appear… but they got eaten too!

4. Sweetcorn
We grew the sweetcorn from seed and had 5 plants that were strong enough to plant out.  As soon as the sweetcorns started to appear, most of them got eaten by slugs/snails and earwigs.

Yield: 4 very small sweetcorns.  They were delicious, but took us about 2 minutes to eat.

5. Gooseberries
We bought two gooseberry bushes.  They were covered in spikes so I didn’t imagine that they would be eaten.  Wrong!  Even though we kept them in pots, every single green shoot on the plants got eaten by slugs/snails!

Let’s move onto the successes now…

6. Flat leaf parsley
Last summer I sprinkled some parsley seeds into a pot… and they grew beautifully!  The plant is still going strong now 🙂  Slugs and snails don’t go near it.  It requires very little care; just the occasional watering. I did bring it into the back porch over the winter, but it’s back outside now.

Yield: Since last summer, I’ve been using this parsley in my cooking and for garnishes.  As soon as you cut it, it seems to shoot up again.  Such a great plant!

7. Basil
Last Spring I sprinkled basil seeds into old yoghurts pots and was amazed how quickly they started to grow.  I transferred the plants into larger pots and put them on the dining room window sill.  They were really easy to look after, looked beautiful, and smelt wonderful as you brushed past them.

Yield: I had so much fresh basil that I made my own home-made pesto throughout the Spring and early Summer. We also used the basil in pasta dishes and for tomato & basil salads.

Before we went on holiday in August, I froze a huge bag of basil leaves, and it was a good job that I did.  The plants had to be left in the garden whilst we were away and, on our return, we found them totally munched and covered in white fly 🙁

8. Rosemary
The rosemary bush has been at our house longer than us!  Slugs/snails leave it alone.  It survives all weather conditions.  The perfect low maintenance plant!

Yield:  A never ending supply of fresh rosemary which I use in cooking and bread making.

9. Lemon Balm
I planted this in the raised bed in the orchard and the slugs/snails leave it alone.  I haven’t used it in my cooking yet, but I’ll be looking out for some recipes shortly.

10. Kale
We filled Lil’ L’s old sand pit with compost, placed it up on our summer house deck and attempted to grow some kale in it.  Shortly after it started growing, a large batch of caterpillars arrived and ate most of the leaves.  About half of the plants survived… and they’re still going strong now. 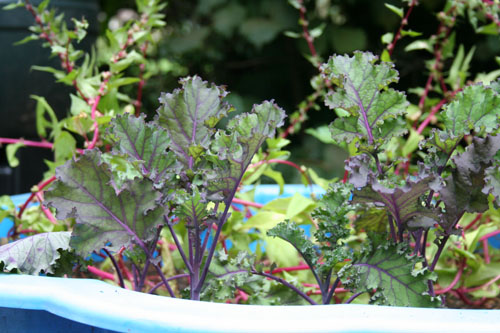 Yield: We’ve got about 3 scarlet kale plants that are still producing lots of leaves.

11. Apples
We had a huge bounty of apples last Autumn.  Literally hundreds 🙂 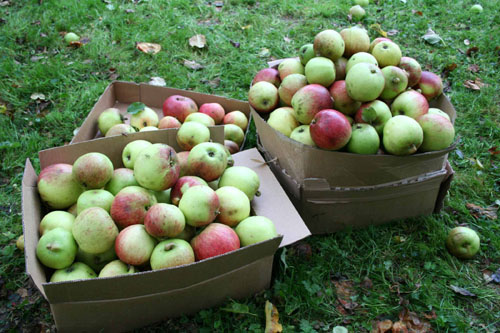 For months, we didn’t have to buy a single apple from the supermarket.  We enjoyed lots of apple compotes, apple crumbles, and apple pancakes.

In an attempt to overwinter the apples, M made this ventilated storage system which we filled with the best apples. 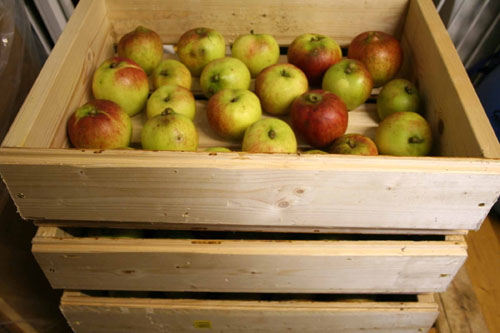 Until a couple of weeks ago, I was still using surplus apples that we’ d stacked in an old cardboard box.  You can imagine how delighted I was when I went to select one of our ‘finest’ apples from the storage system… only to find that the whole lot had been eaten by mice!  You gotta laugh!

12. Plums
Last Autumn we had the best crop of plums that we’ve ever had.  Literally hundreds!  The boughs were so laden with fruit that some of them unfortunately snapped.

I made sure that we didn’t waste a single plum.  I stewed big batches of them and put them in the freezer.  Plum compote is one of my most favourite desserts ever!  We finished our last batch of frozen plums only a few days ago.

Veggie growing plans 2012
Isn’t it just typical that the most success we had last year was with the plants that pretty much look after themselves… the apple and plum trees and the parsley!

This year, I’m not going to bother growing any veggies other than the kale.  I think the kale has got potential to work, but I  must remember to cover it with netting to try and prevent the caterpillars arriving.

I’d love to buy another fruit tree.  Perhaps a greengage?

But mainly, I’m going to focus on herbs.  I’ll definitely be growing more parsley and basil.  I also bought these three little herbs from a charity sale in Lacock – thyme, sage and chocolate peppermint. 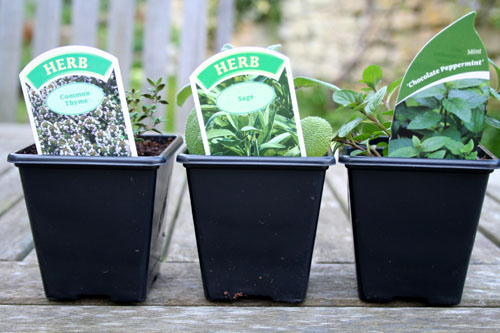 Are you planning to grow any veggies, fruits, or herbs this year?  If so, I’d love to hear your plans.  Can you recommend any easy, low maintentance veggies that I should try? (preferably slug proof 😉 )

Leave a Reply to Amy-Nutrition by Nature Cancel reply