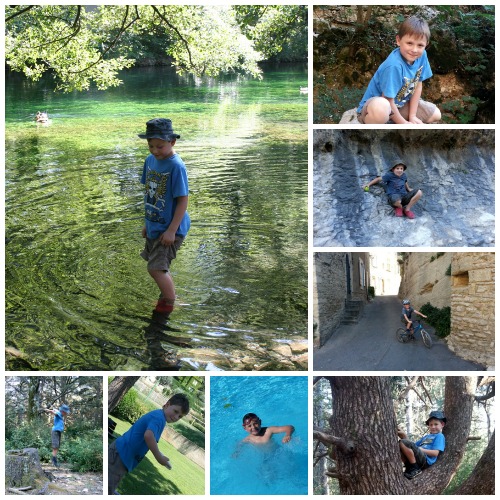 Last month, we were lucky enough to visit the beautiful region of Provence in France. We travelled by car, stopped overnight in Fontainebleau, then headed to the historical village of Goult, which was to be our home for two weeks.

We stayed in a sweet little cottage, which we rented from Eva, a very kind and welcoming Swedish lady that had lived in Provence for many years.

The cottage had everything we needed for a comfortable stay, including a fully equipped kitchen.  Whenever we stay in France, we tend to prepare our own meals. It’s way cheaper (we would easily have spent £60 per day if we’d eaten out), plus I’ve found it near-on impossible to find vegan cuisine outside the big towns and cities. 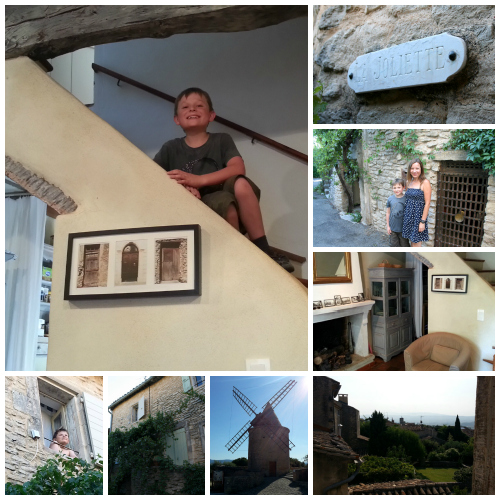 I did bring a few supplies from England with me (mainly bags of raw nuts as these tend to be expensive in France). We bought fresh bread, salad, fruits and veg from the shops in Goult and did our main grocery shops at the hypermarche in Apt. The big supermarkets often have a ‘bio’ (organic) aisle which stocks health foods, wholegrains and ‘free from’ products. We found non dairy milk (including Alpro) in the long life milk section, and soya yoghurts (such as Sojasun) on the chilled yoghurt aisle. We also found big tubs of ready-made houmous, much to Lil’ L’s delight 😉 All the meals we prepared were quick and easy. For lunch, we’d have big plates of salad and crudites, served with freshly baked ‘6 cereales’ bread. We also found Heinz baked beans on the ‘International’ aisle of the hypermarche, which made a tasty quick lunch served on toast.

For evening meals, I’d stir fry a big pan of veggies with spices, then use them as a basis for Mexican fajitas, Moroccan couscous or Indian curries. We also made tomato & basil pasta dishes, red lentil dals and French bread pizzas.

While we were out and about, the boys did eat the odd ice cream, crepe or patisserie but I stuck to nuts, seeds and dried fruit snacks. My stomach appreciated it.  Normally on vacations my stomach feels very unsettled but not this time. I didn’t have a single stomach ache whilst we were away 🙂

We enjoyed so many activities on this vacation! In the mornings, there was tennis playing and frisbee throwing in Goult; swimming at nearby St Saturnin; exploring in the Foret des Cedres in Bonnieux; paddling in the crystal clear waters at Fontaine-de-Vaucluse and plenty of biking 😉

After lunch, we would often go exploring by car, hiking up to hill-perched ancient remains… 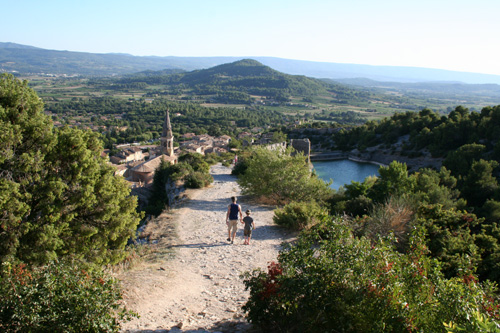 and visiting nearby towns and cities, including the historical and vibrant Avignon. 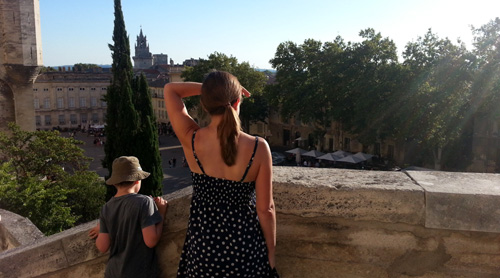 Back at the cottage, we would chill out in the ‘cave’, reading, drawing, playing cards and watching films.  Early evening, I also enjoyed going for runs up and down the hills round Goult, taking in the beautiful scenery 😀 Biking was a big part of our vacation this year. We took our own bikes (strapped to the top of the car) and enjoyed exploring Goult and the surrounding countryside. We cycled past vineyards, olive groves, lavender fields and through cedar forests. It was such a feast for the senses! 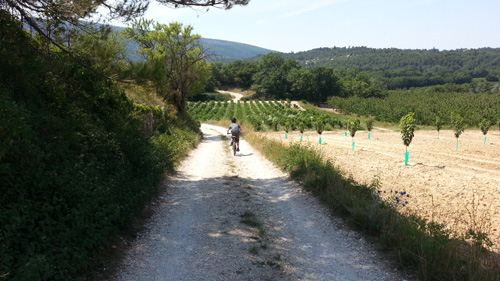 Often, in the mornings, we would cycle to neighbouring villages, which tended to be perched on top of a hill. 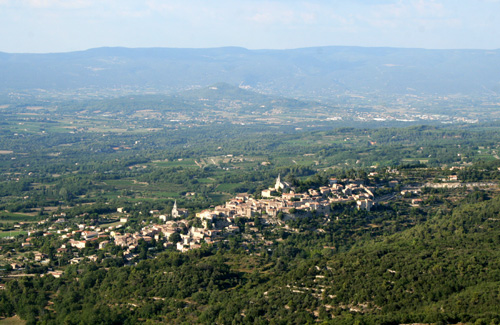 It was challenging at times for Lil’ L … 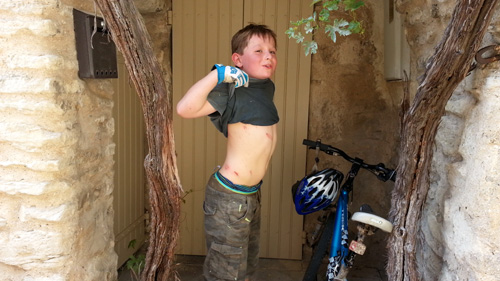 … but it was worth it.  In addition to the great sense of achievement he felt at having ‘conquered’ another hill, there were the rewarding refreshments at the village cafes… and spectacular views to take in ♥ 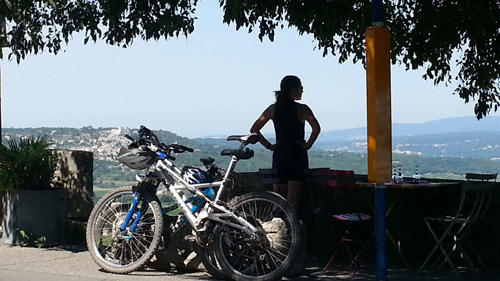 I also took on my own challenge this year and decided to ride a section of Mont Ventoux.  I hadn’t done any hill training on my bike this year, so I knew I wouldn’t be in shape to ‘conquer’ Ventoux, but I thought I’d at least attempt the last 6.5km section.

… and set off on my Marin full suspension mountain bike (much to the amusement of the ‘roadies’) …. 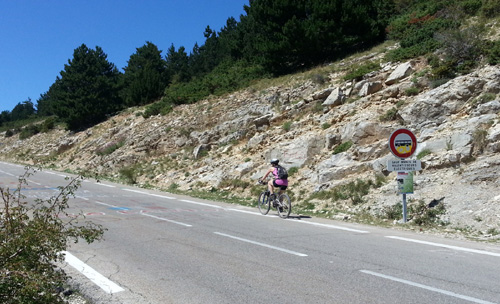 … praying that my 13 year old gaffer taped shoes would hold out!

The final 2km seemed more like 20km, but I eventually made it to the summit. 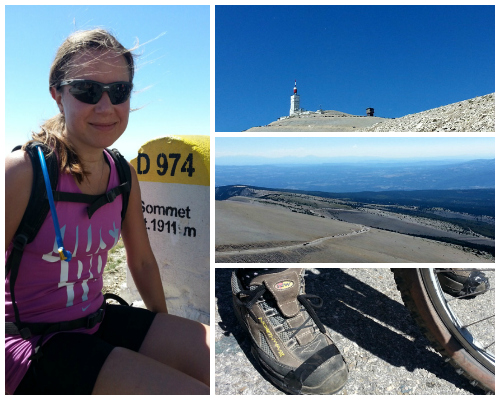 It was a fantastic experience. I’m so glad that I did it!

The two weeks flew by and it was soon time to pack up and head back home, feeling refreshed, revived and fitter than when we’d arrived! 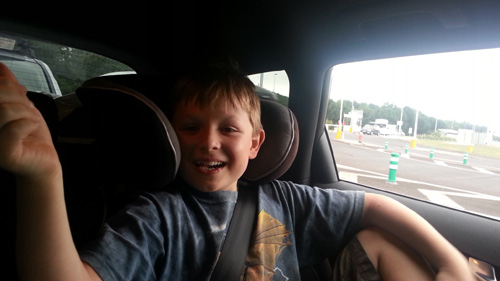 Provence is such a beautiful area of France.  Hopefully we’ll be lucky enough to return one day ♥ 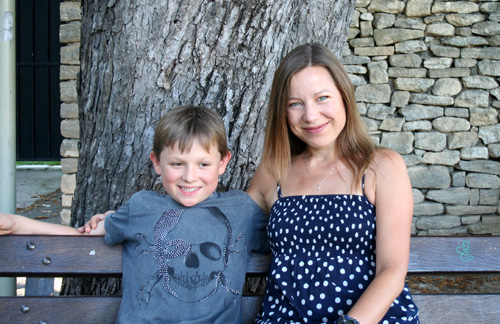 Do you choose to cook on vacations? If so, what are your favourite dishes to make? Do you have any tips for quick and easy meals?