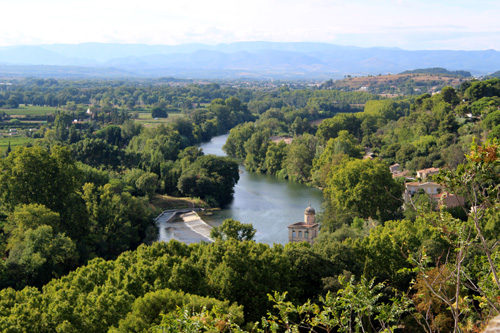 Last month, we strapped 3 mountain bikes to the top of the car, headed through the Eurotunnel and made our way to South West France for our summer vacation. 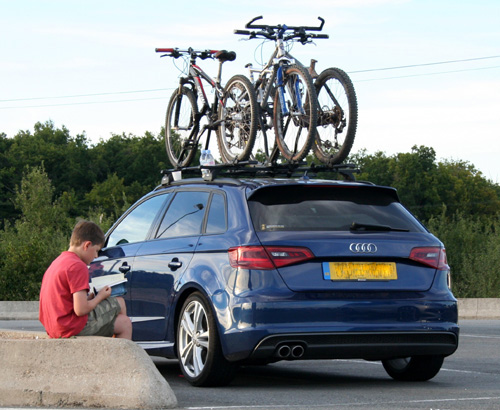 It’s the furthest south that we’ve ever travelled by car and we split the journey over two days, with a stopover at Orléans. The next morning, we continued our journey which took us over the spectacular Millau Viaduct, the tallest bridge in the world! 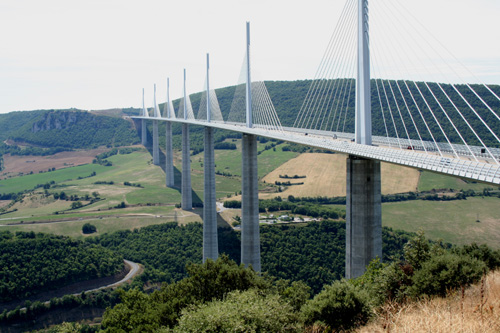 We hired an apartment just outside Pezanas, a beautiful historic town with lots of charm and atmosphere. The town has lots of interesting shops to browse and little cafés where we wiled away the hours, chatting and reading whilst intermittently sipping cafés allongés and fruit smoothies (it’s all about balance right?) 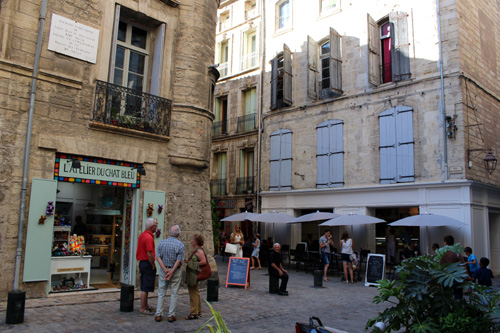 To keep his brain alert, Lil’ L even managed to fit in a little maths practice! 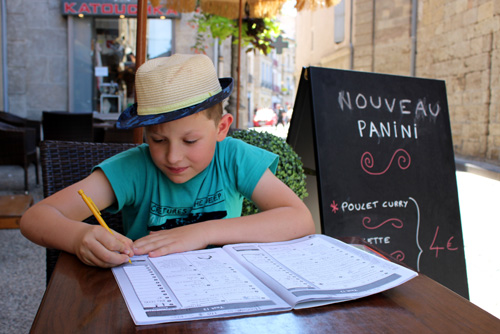 Along with Pezanas, we loved wandering round the town of Beziers… 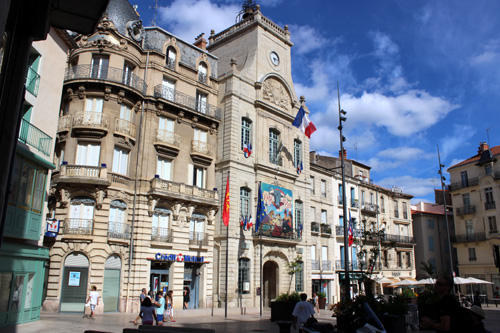 and taking in its breathtaking views. There is plenty to see and do in the region. Highlights for Lil’ L included AquaPark Cap d’Adge, Foret d’acrobates at Montagnac and mountain biking round Lac Salagou.

We were actually biking round the lake when an electric storm started up, which was pretty exhilarating! 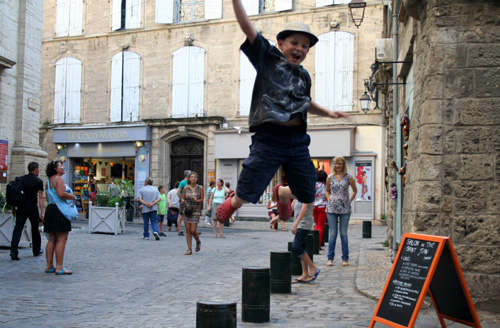 There was also much climbing, leaping and general larking about. Last year it was all about the Diablo, this year Lil’ L took some juggling balls and after much practice, learnt to juggle three at a time. 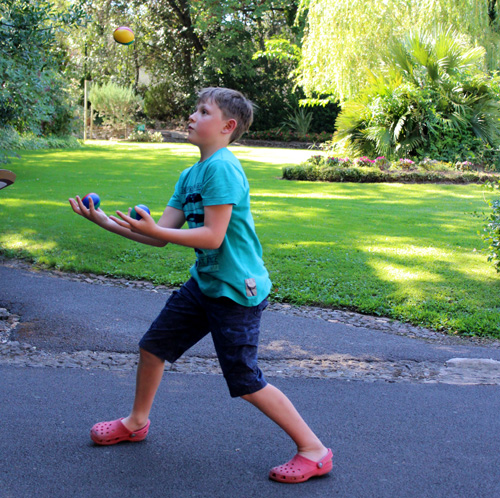 For down time, he loved reading and soaking in the pool at the apartment alongside the lily pads and frogs. 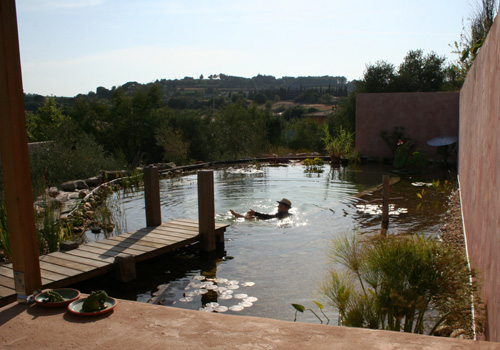 I liked nothing more than escaping the tourist hotspots and heading out on my bike. We cycled through vineyards and pine forests on roads that were hardly more than dirt tracks. We rarely saw a single car or person. It was so peaceful! I just adored soaking up the fresh air, beautiful sights, fresh pine smells and sense of serenity as we pedalled. Invariably we’d end up at a village, where we’d stop for a cooling drink before heading back. I also managed to fit in a few runs and yoga sessions. Before our next vacation I definitely need to purchase a travel yoga mat. Bare floors are a bit hard on the old knees and back!

The only real downside to this holiday were the aggressive mosquitoes living just outside our apartment. They literally started chasing and attacking the second you stepped outside. Lil’ L got 16 bites on the first day alone. The apartment didn’t have air conditioning (and we were in temperatures of 30C+) but we had to keep the doors and windows closed. It was a bit of a shame as there was a lovely outdoor seating area but we couldn’t use it. The apartment owners mentioned that they were planning to install mosquito screens over the patio doors before next season, which would be a great feature.

When it comes to meals, whenever we’re in France (outside Paris) we prepare our own meals. We very rarely find restaurants that serve vegan food, plus it would be way too expensive for us to eat out every day. This time, the only ingredients I brought from England were nutritional yeast flakes, a can of coconut milk and some creamed coconut. Everything else I knew I’d be able to buy in the French supermarkets.

We did most of our shops at E. Leclerc and they had a big selection of non dairy milks (on the UHT milk and Bio aisles), fruity soya yogurts, and caramel and chocolate desserts (the Soya Sun brand). 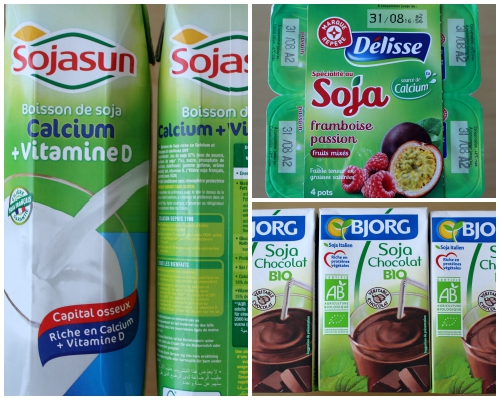 Sadly the two brands of hummus that they stocked had cheese in them (just like our experience in Paris). Fortunately, there was a hand blender at the apartment and it only took a couple of minutes to whip up some home-made hummus, flavoured with cumin, paprika and lemon juice (no tahini as I couldn’t find it). It’s funny how milk/cheese crops up in the most unlikely places. Even some of their cans of lentils had ‘milk’ listed as an ingredient!

On the plus side, we found a delicious guacamole that was dairy free. (To us, this was such a great find as the guacamoles in England tend to include dairy). Lil’ L absolutely loved it. He used it instead of mayonnaise on his salad, as a spread on bread, and for dipping tortilla chips. The kitchen in the apartment was very small. It had no oven, but there was a 2-ring hob and I managed fine with it. I wanted to keep food prep to a minimum, so I was really delighted to find these bags of organic, frozen, ready-prepared vegetables. Some of them were already flavoured (like the ratatouille) while others had a sachet of herbs & spices included in the bag. I really wish we had organic frozen veggies like these in England. They are so handy! 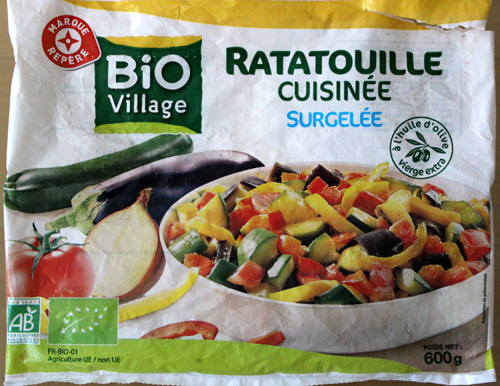 We did check HappyCow.net on the off chance that there would be a veggie-friendly restaurant in the region, but there were no listings. As we wandered past eateries, I did check their menus and I couldn’t find anything remotely vegan… then we stumbled across Hana Sushi in a little side street in Pezanas. This restaurant served edamame, miso soup and platters of Futomaki Vegetarienne (so delicous!), that I’m pretty sure were vegan.

We really loved this restaurant and ate there three times. The staff were really friendly and spoke a little English (enough for us to get by). Whenever we left, they gave Lil’ L origami swans for ‘good luck’. Most days, we packed our lunch to go. We’d fill containers with colourful mixed salad (green leaves, radish, tomato, sweet corn, kidney beans) and used the guacamole as our dressing. We also loved the multi seeded mini baguettes which we filled with herb and mushroom patés (from the Bio aisle in the supermarket), home made hummus or guacamole and salad.

For snacks, we loved these mixed packs of nuts and dried fruits. The nuts were roasted but not salted (non salé). They were really tasty! We also bought dried dates and apricots, and walnuts (for omega 3). We soon accumulated a big pile of empty guacamole pots and they came in handy for storing trail mixes! Of all the countries we’ve visited so far, M and I agreed that France has been the most difficult country to eat out as a vegan; however if you’re willing to prepare your own meals, there are plenty of ingredients available in the supermarkets. I look forward to the day when I walk past a French restaurant outside Paris and see the word ‘vegetale’ on the menu. I’ll be in there like a shot 😉

Have you ever stayed in France as a vegan? If so I’d love to hear your experiences & any tips you might have. What’s the least ‘vegan-friendly’ place you’ve ever visited?