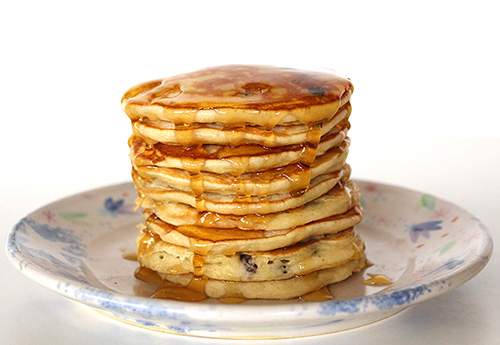 Today I’m sharing a recipe for Sultana Banana Mini Pancakes ❤️ They are quick, easy to make and use basic pantry ingredients. They’re perfect for serving as a weekend breakfast or for ‘elevenses’. Me and Lil’ L have made them three times so far and they have proven to be a big hit with the family.

Have you tried adding sultanas to pancake batter before? They work beautifully in these American-style fluffy pancakes. In fact, I loved them so much that I ended up adding more than the original recipe called for.

The original recipe is from Kate Ford’s Vegan in 15 and was published in this month’s Vegan Life magazine (along with Kate’s ‘Freakshake’ which took pride of place on their front cover!) 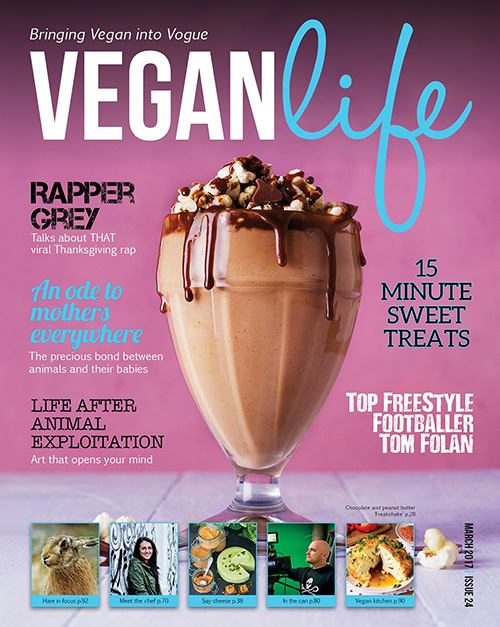 Check out that cute pancake stack! 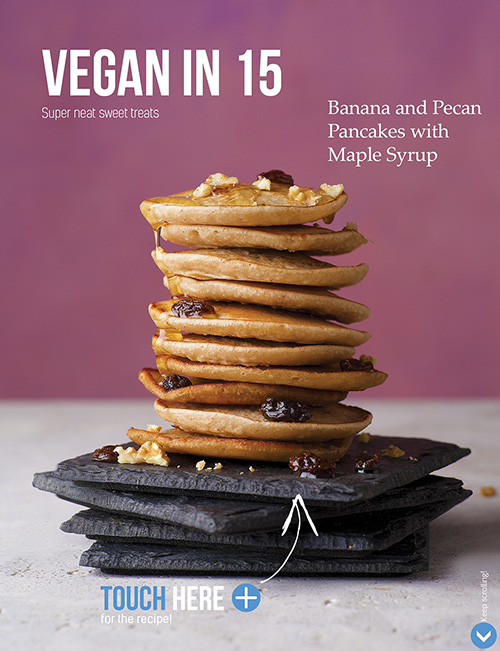 And below is my little pancake stack, before the obligatory drizzle of maple syrup. As you can see, I still haven’t learnt the art of food styling 😊 I still just plonk the food on a plate or in a bowl and click the shoot button on the camera.

Well at least you know how they will turn out when you make them, and the pancakes themselves look pretty similar to the ones above, don’t you think? I just need to work on the presentation. 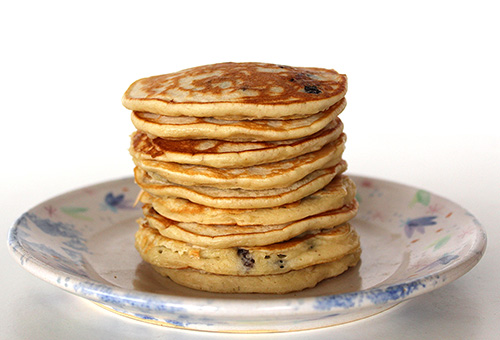 I did tweak Kate’s pancake recipe ever so slightly, increasing the quantity of sultanas (as we were enjoying them so much!) and omitting the nuts from the batter (so we could keep them as an option for sprinkling on top instead). I found that the flour conversion from grams into cups in the Vegan Life magazine was slightly off (according to my scales and cups anyhow!) so I’ve taken this into account in the recipe I share below. 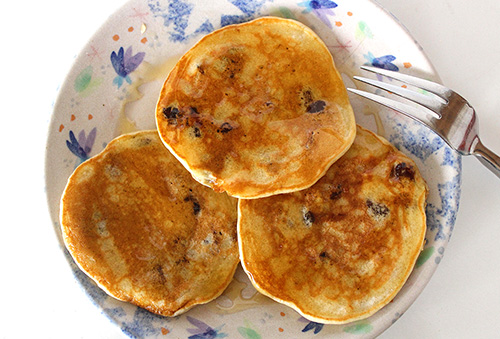 I usually get nine pancakes out of the batter, which means three pancakes each for me and the boys.

As soon as the photoshoot was over, you can guess where these three ended up. 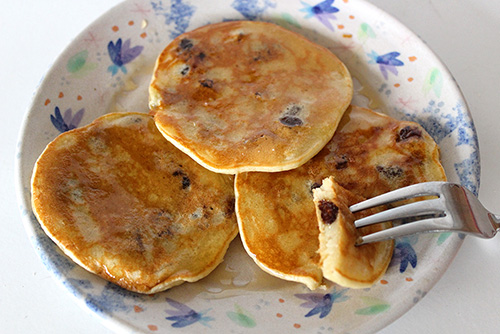 These mini pancakes are perfect for serving as a weekend breakfast or for ‘elevenses’. The recipe is lightly adapted from the Banana and Pecan Pancakes recipe in Kate Ford’s Vegan in 15. We love these pancakes with sultanas in the batter and chopped nuts as an optional topping, but feel free to add 2 TBSP chopped pecans into the batter as per the original recipe.

1  In a blender or food processor, blitz the banana, milk, flour, syrup and salt into a smooth batter. Pour into a jug and stir in the sultanas.

2  If possible, use two frying pans (skillets) to halve the cooking time. Brush the bottom of the pan with oil and heat on medium heat. To check the pan is hot enough, flick a few drops of water into the pan. If they sizzle, the pan’s ready.

3  Pour the batter into three separate circles to create mini pancakes (I use my ice cream scoop – one scoop per pancake). Cook for a minute or so until the underneath is golden brown, then flip over and cook for a further minute. Pop them in a warm oven while you prepare the remaining pancakes.

4  Drizzle with syrup, sprinkle on some chopped nuts (if desired) and serve.

5  These pancakes will keep for 3 days in the refrigerator. Gently heat through before serving.

Have a great weekend everyone!