Today I’m delighted to be sharing the recipe for one of my favourite childhood treats – Old Fashioned English Bread Pudding. Its name certainly doesn’t do it justice though, as it tastes nothing like bread nor would I describe it as a pudding! Instead, it is more like a sweet, dense fruit cake. It is delicious served with a hot cuppa, and also makes a fantastic energy-boosting snack to stash in your backpacks for hikes and bike rides. I think this year, all of us have been spending a lot more time outdoors and we definitely need some tasty snacks to keep us fuelled and put a spring in our step. This bread pudding definitely fits that bill!

When I first went vegan, I thought that I was going to have to forego this favourite treat of mine, but it turns out that it was really easy to ‘veganise’ my family’s traditional bread pudding recipe. It was simply a case of switching the cow’s milk for plant milk (I use soya), switching the butter for oil, and ditching the egg. I honestly couldn’t tell the difference from the original. I was absolutely over the moon that my beloved bread pudding was back on the menu.

When I was selling my cookbook at local fairs, I would often take some trays of bread pudding to display on our stall, and they would go in a flash. It was a running joke that the bread pudding was our top sales person as people would often buy a slice, then come back to buy the book specifically for that bread pudding recipe!

Since my cookbook is almost out of print,  I thought it would be useful to share the recipe here on the blog, so everyone can enjoy a slice or two of this tasty treat.

It is really easy to make and super cheap too! It is traditionally made with stale bread, but as bread never hangs around long enough in my house to go stale, I buy a cheap loaf of wholemeal bread instead. The supermarkets’ own brand medium-sliced bread only costs about 60p and you need less than a whole loaf to make 16 slices of bread pudding, making it an absolute bargain! 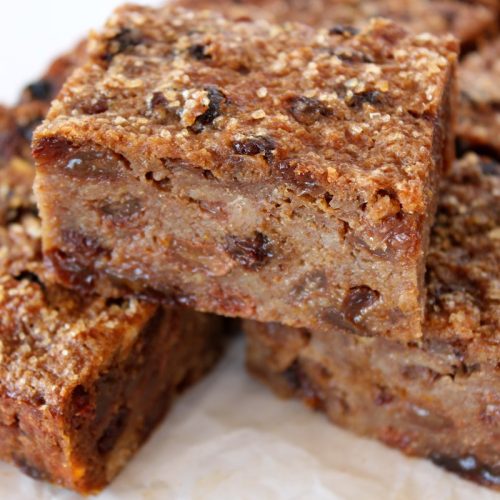 Its name certainly doesn't do it justice, as bread pudding neither tastes like bread nor would I class it as a pudding! It's more like a sweet, dense fruit cake. It is delicious served with a cuppa and also makes a fantastic energy-boosting snack for hikes and bike rides. It's super filling, so be sure to cut those squares a modest size!
5 from 1 vote
Print Recipe Pin Recipe
Cook Time 2 hrs
Hands-on Time 20 mins
Course Snack, Treat
Cuisine English
Servings 16

If you make this Old Fashioned English Bread Pudding (or any other recipes on my blog), I’d love to hear your feedback and any suggestions for adaptations! Tag your photos with #bitofthegoodstuff on social media and they will find their way to me. You can also connect with me on my social media channels here: Instagram, Twitter, Facebook, Pinterest.