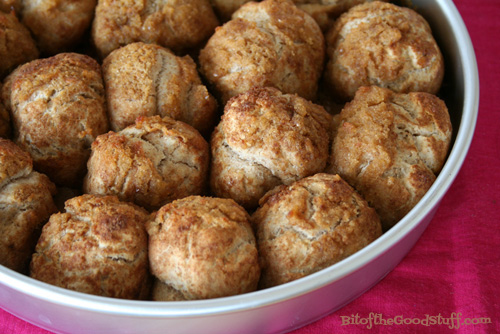 When I first started blogging, I recall there was a wave of health food bloggers posting recipes for ‘Healthier’ Monkey bread.  I had absolutely no idea what ‘Monkey bread’ was or why it had such a funny name!

Wikipedia soon filled me in…

Monkey bread, also called monkey puzzle bread, sticky bread, African coffee cake, golden crown, pinch-me cake, bubbleloaf and monkey brains is a sweet, sticky, gooey pastry served in the United States for breakfast.  The bread is made with pieces of sweet yeast dough which are baked in a cake pan after first being covered in melted butter, cinnamon and sugar. It is traditionally served hot so that the baked segments can be easily torn away with the fingers and eaten by hand.

Sounds yummy doesn’t it?  However, traditional Monkey Bread isn’t particularly healthy.  It contains A LOT of fat and sugar.  In contrast, the ‘healthified’ versions often use bread or pizza dough as their base, and are glazed with healthier alternatives to butter and refined cane sugar.

One Sunday, I decided to have a go at making some Apple and Cinnamon-Spiced Healthy Monkey Bread as a ‘special breakfast’.  It was a huge hit with Lil’ L and M and,  I must admit, I’m rather partial to it too. 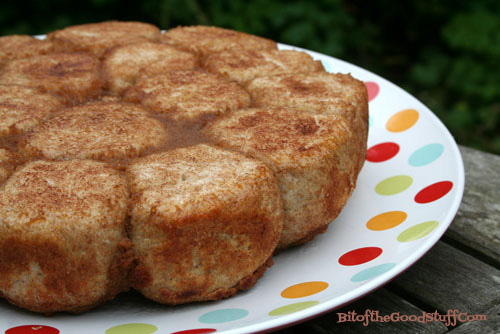 However, we prefer to eat it straight from the pan.  Hands get less messy, and you can use the balls to mop up any syrup left in the pan. 😉

If you’re lucky enough to have a breadmaker, then this recipe requires very little effort at all.  You simply throw all the dough ingredients in the machine and press a button.   I’ve had my breadmaker for a couple of years now and it’s been fantastic!  I reckon it’s easily paid for itself in terms of the amount of times we’ve chosen to stay in rather than going to Pizza Express!

Today, I made some Monkey Bread as an after-school treat for Lil’ L and his friend, and I made it by hand to see how it compared to the bread-maker version.  To be honest, making dough by hand doesn’t require THAT much effort.  It takes less than 15 minutes, which isn’t too bad at all.  Plus kneading dough is great exercise for the arms.

Below I’ve given instructions for making the Monkey Bread by hand and in a breadmaker.  If you’re planning to eat it for breakfast, you can easily prepare the dough the night before and chill it in the fridge.  In the morning, simply remove the dough from the fridge about 20 minutes before you need to use it.


I hope you enjoy it as much as this little monkey 😉 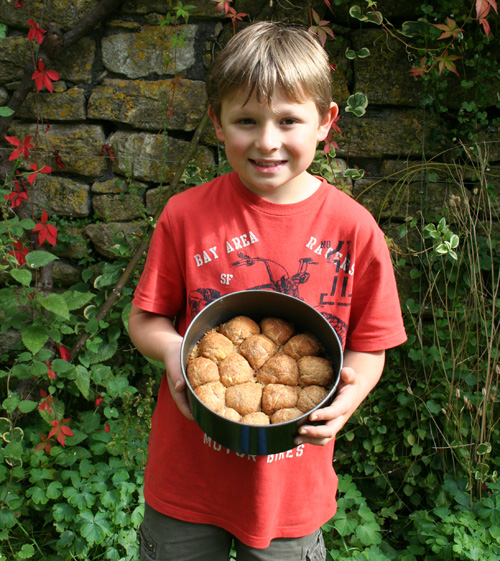 I’m delighted to announce that the winners are…

Please email your postal addresses and I’ll arrange for the gifts to be sent to you asap.

Have a great weekend everyone! xx